Every living Being is a miniature reflection of the Universe. Our endocrine glands are responsible for our endocrine disruption. They are being controlled by a number of specific planets in our solar system. Every day and every minute, the conjunction of the planets is changing while our endocrine glands are being dominated by them. This astrological influence has psychological consequences too! Each planet has a different meaning and each planet brings about a different behavior in living beings. The Sun brings about happiness and naiveté and Venus triggers our sensuality. But maybe your planet today is Saturn, the Moon, Mars or Jupiter. What do they tell you and what can you learn from them? Which planet is influencing you the most today? Consult this unique Planetary Oracle by clicking on the card intuitively and discover how the planets and their meanings are connected to your daily life. 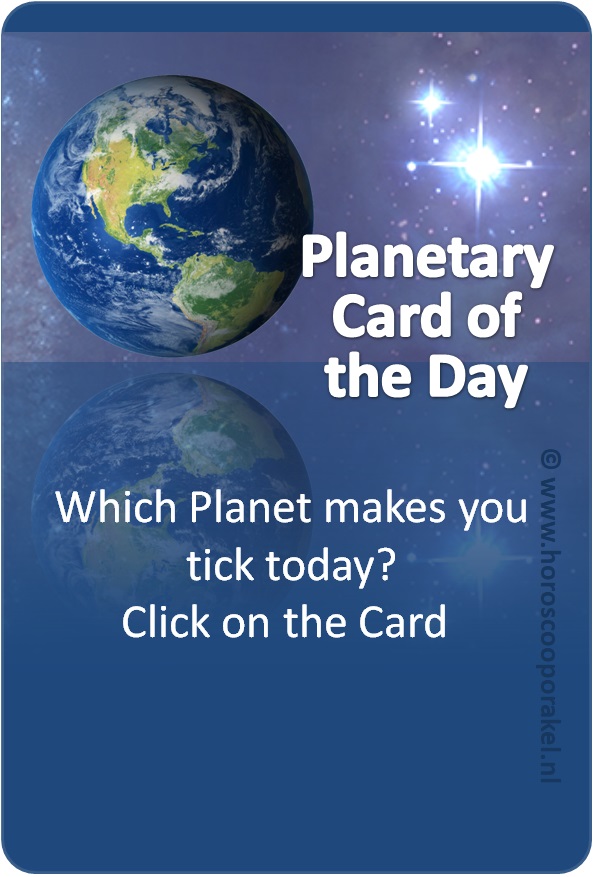 The creation of the universe

Initially, the Earth was just a ball of melted lava, with an atmosphere of water vapor and poisonous gases. Cooling down, the surface solidified and became the earth's crust. Gradually, the water vapor condensed into oceans in which bacteria appeared and grew. These bacteria were made of one cell, but already possessed the essential property of life: a DNA chain. A billion years later, these cells were given a nucleus. This more complex internal organization would pave the way for cooperation between cells. Groups of bacteria that lived in symbiosis even went as far as staying together permanently. Within that colloquium, each cell began to specialize. Therefore, complex living organisms exist thanks to co-operation.

The era of mammals began with the extinction of dinosaurs, probably as a result of the fall of an asteroid. The dust mass generated by the shock would have obscured our planetary atmosphere. The temperature of the Earth fell to a deadly level for the dinosaurs. But some of them may have mutated to breed. They are new creatures that still exist today: birds. The expansion of mammals took place only 50 million years ago. This time frame represents only the last 0.3% of a universe that already exists for 15 billion years. Another consequence of the Earth cooling is, that the carbon-rich forests have made way for the trees we know today. The giant equoia trees were born.

The appearance of man

The oldest ancestors of man (the Australopithecus) appeared 4 million years ago. The ancestors who are a little closer to us (like the homo erectus), began to use tools. 750,000 years ago, the fire was controlled for the first time. From now on we're still changing the time scale by speaking of thousands of years. The present man (homo sapiens-sapiens) appeared 200,000 years ago, a time span that represents only 0.0013% of the life span of the universe. Of these 200,000 years, 194,000 years correspond to the so-called 'prehistory'. The people of that time lived in nomadic groups and fed on collecting, hunting and fishing. They are aware of death, use language, sculpt objects and create artistic representations like paintings on rocks.