The Hermit sheds light on your past and reveals the mystery of your future.

Follow the instructions (it's not difficult!) and discover your future opportunities.

NOTE: After each click, the cards are shuffled again. In the Hermit's Mystery Spread, the same card may exist several times.

Click on the Hermit's Lantern. The Hermit will shed light on your past. 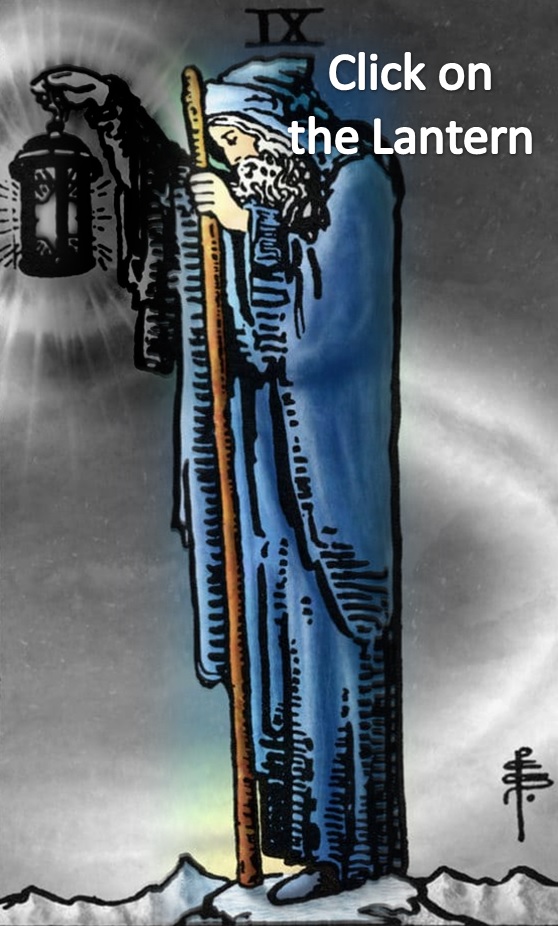 Past and future are closely connected. Therefore the Hermit needs information from your past in order to shuffle the following cards and reveal the mystery of your future.

Card 1: Pain from the past

While you click on your card, say to yourself: "This hurt the most in my past"

Card 2: Your lesson from the past

While you click on your card, say to yourself:"This is what I have learned"

Card 3: Happiness from the past

While you click on your card, say to yourself: "This was the most beautiful in my life"

While you click on your card, say to yourself: "Where did it get me?"

Well done, you've come quiete far.
NOW, THE HERMIT'S REVEAL PROCEEDS
The Hermit looks to his left while enlightening your situation. Thus, he sheds light (Insight) on your past.

Click on the Hermit. Now he will shed light on your future. 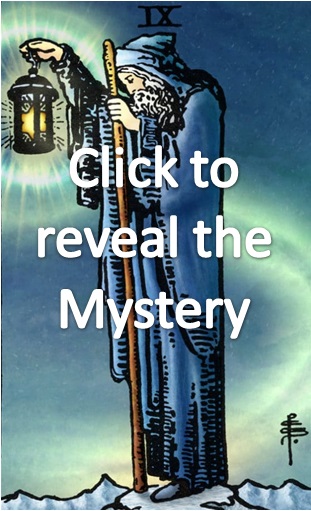 While you click on your card, say to yourself:  "This is  my future opportunity" 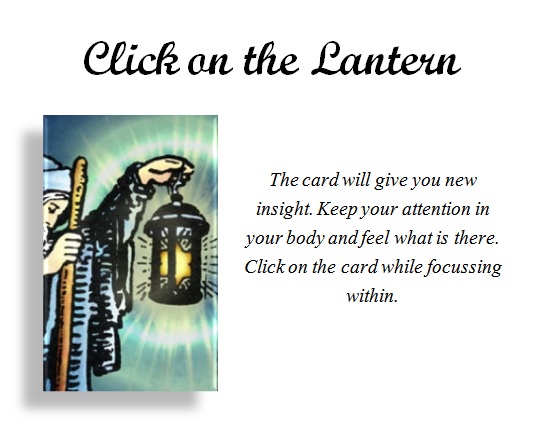 Card 6: Glimpse into the Future

While you click on your card, say to yourself: "This will come to me in the future"

Let's tale a look at the five letters of the word TAROT in Sanskrit means "Star". TORAH in Hebrew means "the law of Moses". TAR means "away" and RO means "Royal" in ancient Egypt. ORAT means "He says" in Latin. TAO- is "the universal way". We can see, that the word TAROT encompasses all these meanings.

The 78 cards are divided in two groups: 22 Major and 56 Minor Arcanas, of which 40 are numerical and 16 non-numeric (4 kings, 4 queens, 4 knights and 4 squires). The term 'Arcana' means "secret". Instead of 'card' the word Arcana is often used to indicate, that the Tarot has an esoteric meaning. Through the hidden allegory, the shapes and colors, but also the characters and objects that are depicted, the card becomes both a mystery as a protector of secrets and represents an alchemical process. The archetypal concept stems from Jung's philosophical studies and connects us with the content of mankind's most archaic and oldest history, which we perceive through the prism of the collective unconscious. In short, the archetypal system forms the underlying patterns of behavior, the model, the plan, the concept. It's a universal matrix with which we identify. The 22 Major Arcanas of the Tarot represent the 22 steps that must be overcome in order to be connected to the 22 components of our human and divine psyche.

The Tarot goes into the depths

While the Major Arcana represents the most important motives, prominent accents and directions, the Minor Arcana reflects the detailed processes and dynamics of our soul. Altogether, there's an infinite variety of aspects of life, phenomena, events and ideas that are part of life. The 4 Minor Arcanas represent the 4 elements as the foundation of the physical world. The Wands, as fire cards of the spiritual world, are associated with passion and inspiration. They are a source of light, causing an outburst of ideas to develop. The cups are water cards and therefore, cards of emotions. They are associated with deeply felt elements. We use bowls to pour in liquids, we drink our water with cups or glasses, we drown our sorrows in wine. The Swords are like aerial photographs of the mind and are associated with spiritual consciousness and communication. Swords are thoughts, ideas or words that cut through the air. Pentacles are the earthly cards of material existence, They are associated with the physical aspects of life in the four-dimensional world. They are a symbol of the true reality of the physical world, objects, matter and money. The perception of the symbolic function of each Tarot mystery encourages us to look at ourselves and dive into ourselves. At the same time, it asks us, to turn to the outside world to recognize the elaboration of the possible prognosis of events.

This free Tarot Reading is an original and enlightening game of intuition. Tarot cards are keys that decipher messages and higher knowledge of ancient civilizations. Tarot images are made to convey esoteric knowledge and are the result of an encryption method derived from the great myths of mankind. Before the creation of the written language, the different traditions were conveyed orally, before making way for signs and symbols. These were the first steps towards a reflection on the creative and allegorical universe, implemented through playing cards and Tarot cards.

The architecture of the Tarot

If we consider the 78 Arcanas as architecture and as a carefully organized picture book that follows a strictly defined hierarchical structure, then we can assume that the Tarot game is an ideal system with a closed combination of symbols. Underneath this seemingly innocent appearance, lies wisdom and occult knowledge. We must always be aware, that this knowledge contains philosophical, spiritual and psychological aspects. The Tarot itself, combines different dimensions and can therefore be interpreted in different ways: alchemical, Kabbalistic, esoteric and magical. Of course, your free Tarot Card Reading on this page, can also be used as a tool for self-knowledge, personal development and future prediction.