Are you in a difficult situation? Do you want to know how to approach things right now? Are you curious about your further development?

In that case, this is the Online Tarot Card Spread for you! Focus on your situation. Draw your cards by clicking them one by one. See each card as an energetic feature present in you.

This is the best approach: 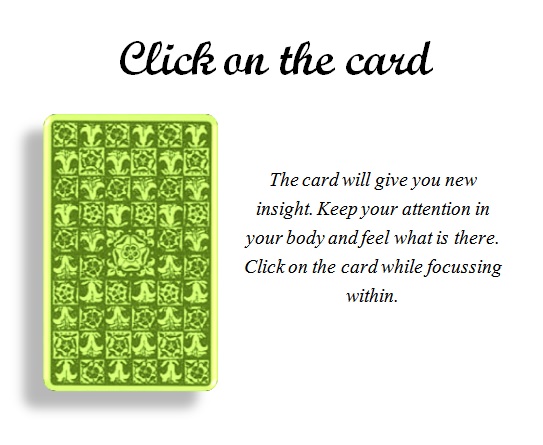 This is how it develops:

This is your future opportunity:

How to get the most out of this Online Tarot Spread?

If you are aiming for the best result in personal matters, this Tarot Three-Card-Future-Reading can show you how! These Online Tarot cards may serve as a road map to the future. The first card is the card of the best approach. Use this card to compare the way you usually do things with the information your “approach-card” contains. It may be, that you only have to fine-tune yourself. On the other hand, your card may not meet your expectations at all. Therefore, try to see your Online Tarot Reading as a challenge to look at things from a different angle. Try to do things otherwise. Letting go of old patterns is one of the valuable functions of Tarot Cards. The second card depicts what kind of development can take place if you allow yourself to remember your first card and act accordingly. The last card is connected to the first two cards and is a representation of your personal future opportunities. This Tarot Reading challenges you to look at yourself and to change what is ready for change. It may lead to your most inner wisdom. Use your Tarot online card reading as a helping hand and as a way to make your motivation take flight.

A Tarot deck can be drawn and read by using inverted cards, or cards that are "upside-down". Although it's not common practice anymore, experienced Tarot Readers will sometimes use 'reversed cards'. A reversed card leads us to the so-called "negative" sides of a card, a problematic theme or negative influences in connection with a living person. In general, it means, that the energy of the most important symbols in a card, is slowed down, reversed or blocked. It may be, that a certain human quality or characteristic does not express itself as intended. In the case of reversed action cards, we could say that it's not the time to do something or that something is not working at that moment. But, reversed Tarot cards are not always negative! There are exceptions, because some reversed cards may just as well contain positive messages. It is even possible, that a fully inverted lay-out can be interpreted in a positive way. So, what would be the point of drawing "upside-down" cards? Is it really necessary to include inverted Tarot cards? Actually, it's just a matter of personal taste, common sense and some analysis.

Each card has lighter and darker sides. Both sides are equally important, regardless of whether a card is upside down or not. If a Tarot reader chooses to work with inverted cards, that's fine, but the reader/interpreter must alsmost be aware of overly negative interpretations. As said, a reversed card is not necessarily a negative card. On the other hand, reversed cards can certainly indicate a blockage or a delayed project, but the lighter sides and the other cards must have to be taken into account also, in favour of a complete interpretation. Your Tarot Online is in good hands at Free Horoscope & Tarot. You will be amazed by a large number of different card spreads.